Supercyclone Pam, bringing winds gusting to more than 300 Kph, swept nearly two dozen of Vanuatu’s central and southern islands bare. The destruction is difficult to conceive of, harder still to express. Let one tiny example stand for all: A brand new trade school, constructed to the state of the art, razed after only ten days in operation. Behind it lie the shattered remnants of a giant banyan tree. These trees are integral to Tannese custom; because of their monumental size and durability. Indeed, each of the storied twelve nakamals (sacred gathering places) of Tanna is located under a banyan tree.

Both the ancient and the modern were swept away with equal ease by Pam’s unprecedented power.

A broken guitar lies among the ruins of a newly built trade school, destroyed when cyclone Pam hit Vanuatu. The school had been open for a mere ten days.

To everyone’s surprise, even amazement, only five of the island’s nearly thirty thousand inhabitants perished. The story is the same on all of the worst hit islands: On Efate, with the highest population, just a handful. Two more from tiny Emae, which took a direct hit from the eye of the storm. The list goes on. In all, only eleven people have been confirmed killed, and four of those had been in hospital in serious condition prior to the cyclone.

Nobody can say for certain just yet why the death toll has been so remarkably low. There are likely a number of contributing factors. The first is that the Ni Vanuatu people have had 3000 years to prepare. Historically, Vanuatu has received an average of 1.5 cyclones per year for as long as we’ve been keeping records. Local dwellings are designed with eaves nearly reaching the ground in order to prevent the roof from being blown away. The bamboo walls and natangura-thatched roof are flexible and sufficiently porous to withstand even the strongest winds. Some people hid in purpose-built traditional cyclone shelters. These are tiny, half-subterranean shelters dug into a hillside, walled with tightly woven bamboo. They are cramped, dirty and wet, but they go a long way to ensuring survival.

Had this been a ‘normal’ cyclone, it’s doubtful whether it would have made the news at all.

Traditional knowledge and experience joined with information technology in saving lives. Begun in 2008, the government of Vanuatu’s universal access policy has resulted in mobile phone services reaching more than 90% of the population. As the cyclone approached Vanuatu waters, the government chief information officer and the telecommunications regulator negotiated free broadcast SMS notifications that successfully warned virtually the entire population. On top of that, better communications allowed for the identification of evacuation centres throughout the country well before the storm made travel deadly.

In a tragic turn of events, not less than two of the fatalities on Tanna were the result of an evacuation centre losing its roof at the very moment a family was making the dash to safety. This is a reflection of the enormous strength of the wind, which reached a sustained speed of well over 200 Kph in this area.

Vanuatu was more than fortunate to have survived the initial shock of this terrible weather event. Arguably, it has done so more effectively than most other nations could.

The country’s resilience has also been remarkable. Power began coming back on in the capital within 36 hours. Considering that there were scarcely 200 contiguous metres of transmission cable intact after the storm, the local utility’s speed of recovery should provide an invaluable case study for first responders in other natural disasters. 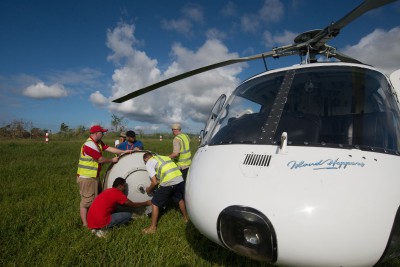 Digicel Vanuatu CEO Simon Frasier helps load a microwave antenna onto a chopper flowin in from Fiji to assist with the recovery from cyclone Pam, which damaged communications towers the length of Vanuatu.

Both Digicel and Telecom Vanuatu Ltd, Vanuatu’s two national telecommunications providers, were offering limited mobile and 3G services within four hours of the eye passing the island of Efate. Telsat Pacific, a Port Vila-based ISP, lost its main communications tower to the storm. The wind tore a 1,500 kilogram anchor block out of the ground and flung it into a building 5 metres away. Three days after the storm, a replacement tower had been jury-rigged from salvaged parts and core services were back. This has allowed many aid organisations to sustain their communications at a key moment in time.

Digicel, which suffered the loss of four inter-island communications towers, restored 70% of its national network within five days of the storm, and 100% within ten days. I experienced directly the all-hands-on-deck approach the company took when Digicel Vanuatu’s CEO, Simon Frasier, personally escorted me and a colleague onto the Port Vila airport tarmac, and then grabbed one side of a Tanna-bound microwave antenna and helped load it onto a chopper. You can’t buy this kind of commitment.

To complement this, the international NGOs, the UN agencies, military from the UK, Australia, France and New Zealand, and hundreds of well-meaning volunteers have all played a critical supporting role in ensuring the survival of over 130,000 vulnerable people.

But—and I cannot emphasise this enough—none of this will have been sufficient if we don’t get the next phase right.

The logistical challenge is greater than anything this nation has faced since World War II.

Nearly two dozen islands, once among the lushest and most abundant in the world, have been denuded, leaving about half the nation’s population with little or no food and clean water, and at risk of starvation unless supplies reach them now—and continue to reach them consistently for the next three months at a minimum. Countless schools will have to be rebuilt. Medical services will be required. The logistical challenge is greater than anything this nation has faced since World War II.

The World Food Program and UNICEF are assisting with the flow of foodstuffs and other essentials into the country, and countless NGOs and aid organisations are lending a hand in this monumental undertaking, but ultimately, the success of this endeavour rests with a small core of individuals in Vanuatu’s (rather inaptly named) National Disaster Committee.

One Vanuatu official was heard commenting that the National Disaster Management Office had once been considered the orphan child within the government departments. Its staff of four performed a mostly symbolic role. That all changed a couple of years ago, when the government realigned itself, integrating climate change preparedness in its national strategy. With a ministerial portfolio assigned to the task, it finally became possible to gain some traction in cabinet. Today, the director of the climate change department is at the head of the NDC, and his minister is second only to the PM in the national disaster management hierarchy.

Vanuatu’s ability to mobilise quickly and to assess and adjust more or less on the fly has ensured that, so far, we have not become what government officials characterise as ‘another Haiti’, in which agencies and NGOs simply materialised in the sky above the airport, landed and began disbursing goods and services without regard to what was already there or even, in some case, with what was actually needed.

The mantra here in Vanuatu is ‘no cowboys’. We all work together, or we don’t work at all. 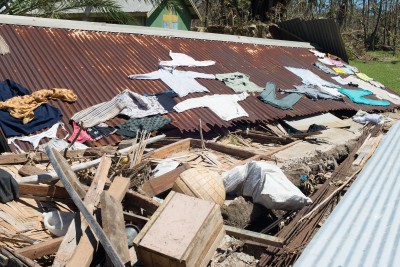 Laundry dries on the wreckage of a house in Lamkail village, Tanna.

Virtually all of the supporting governments, agencies, NGOs and well-wishers have accepted the wisdom of this course of action. They have accepted as well the key instruction that aid is to be provided fairly, equitably and universally. ‘We understand that every NGO needs to plant their flag,’ said Benjamin Shing, who is responsible for disaster response operations, ‘but people need to realise that any mistakes we make today will remain with us for a generation.’ The potential for resentment and even civil strife resulting from inequities in access to aid is something many, if not most, aid organisations often overlook in their rush to provide services.

Overall, the aid operation has begun to coalesce. Most organisations have been successful in fighting their natural tendency to operate independently, and the aid has—so far—begun flowing smoothly, and in sufficient quantity to ensure the survival of the nation’s most affected population.

We have successfully moved from the sprint phase, an all-out rush to assess the damage and treat the wounded, to the marathon phase, in which we spend months backstopping the food, water and shelter needs of half a nation. The stakes today are just as high as they were the day after Pam struck the country down. We are in a race against time.